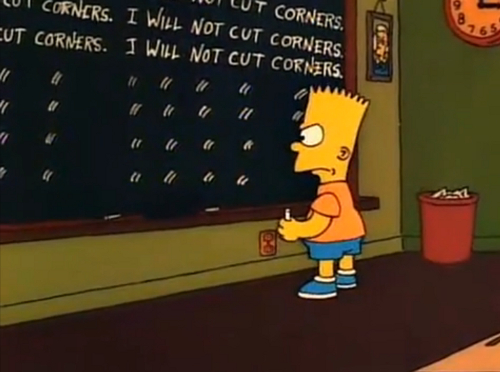 What can I say?  A good year but at times a little crazy…

As it draws to a close I thought it would be worthwhile reflecting on the past twelve months, and see what could be learned from it.

About this time in late 2016, my colleague David Manchee penned a note explaining the profound effect he expected the election of Donald Trump to have on global markets.  In David’s note  he discussed how despite the fact that Trump as a person is perhaps morally questionable, his policies designed to reduce regulation and create better conditions for companies in the U.S would result in the creation of jobs and better economic conditions across the country.

In particular, David mentions three key factors that would increase the incentive for businesses to invest in the United States being lower energy costs, less red tape and access to financing.  Since January the DJIA has set multiple record highs and even  some Australian companies with US facing earnings have outperformed the Australian market.

According to the Politifact.com “Trump-o-meter”, from the array of promises “the Donald” made during the election campaign, those he can put in the complete pile are centered around making business conditions easier in the USA, encouraging Americans to shop locally and businesses to pay tax locally.  Incentivising American corporations to pay their tax at home will also go a long way to funding his promise to invest $550 billion in infrastructure which is reported to be underway.

So what’s the verdict?

It seems that David was correct in his analysis, and by disregarding Donald’s personal traits, and focusing on the fact that he is simply a businessman,  David foresaw that business conditions were likely to get easier under Trump’s presidency.

Don’t get bogged down in the details.  The most common sense outlook is likely the most probable.  Trump is a developer – developers like to build stuff and invest in projects.  It is easier to do that without unnecessary regulation and with access to financing.  Subsequently, Trump delivered just that.

By March, my focus had moved to borrowing and negative gearing.  It had been said by a few during 2016 that the Australian property market had run up too far and was due for a correction.  Come March ’17 and property prices continued to increase, so more and more were comfortable with borrowing large sums of money to start or add to their property portfolio.

Regulators did their best to try and cool the rising market by capping the lenders ratio of investor property loans, but until very recently this had little effect and Australia’s housing debt continued to rise.

On the 15th of May, David and I wrote an article suggesting negative gearing an equities portfolio as an alternative to property given the appearance of a crowded trade.  At the time the market was trading at a dividend yield of around 5%, and margin funds could be borrowed at about the same or slightly less.  Given that dividends can have franking credits attached and a deduction is available for the interest paid, the entire investment thesis including the tax advantages seemed to make far more sense at current prices.  Additionally, if you view both property and equity markets as a single entity, comparing the leverage ratios (like you would with a business), wouldn’t the one with least debt seem like the more viable option.

Despite the liquidity risk and high transaction costs, the perceived security of ‘bricks and mortar’ has lulled Australians into a false sense of security.  The charts above and below clearly show that property prices are being pushed higher with borrowed money whereas equities continue to grow in the face of declining leverage.

The refusal of many to consider geared equity investment has created a market inefficiency.  In the US, investors took the opportunity to leverage their investments at the low prices post GFC and have reaped the rewards, while Australians have been reluctant to take the same approach.  To date the ASX has under-performed global markets and this skew toward gearing property may be the reason why.  Here is a chart from an article I sent to the Australian Financial Review back in May this year which tells the story in more detail. 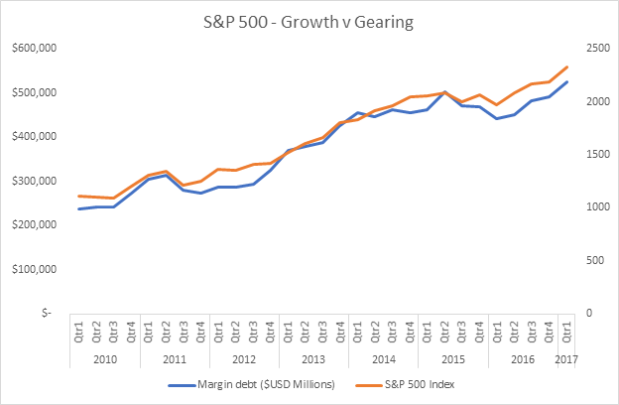 3. A test of conviction.

Anyone invested in lithium stocks this year will confirm it has been a nail-biter.  Many analysts were forecasting that global lithium demand would likely subside and coupled with increased supply would put downward pressure on prices.  Some even went as far as to label it a fad.

As most who follow David and I will know, we have been proponents of the lithium sector for a long while now and Orecobre (ORE), an Argentinian lithium producer, is one of our largest overweight positions.  Well… March this year was a test as global hedge funds turned the daggers on Orecobre seeing the stock over 20% short sold, and despite repeatedly having to defend the future of battery storage and electric vehicles to many lithium dissenters, we maintained composure and conviction.

Many underestimated the overwhelming support of moving to greener sources of energy and how quickly the technology would advance to fill this need.   To fully appreciate how lithium-ion battery technology is going to change the way we travel and power our homes and business, all one needs to do is watch this video of Elon Musk talking to a TED audience this year.

Be prepared to trust your judgement when the research stacks up.  The pace at which our world is changing is ever increasing, and with any disruptive technology there will always be those who think it won’t catch on.  The power of disruption can be a double edged sword, and the ability to understand how technology will change marketplaces around the world is  now one of the most important aspects of investment management.

Which brings me to my final reflection from 2017.

4. Do not underestimate the power of disruption.

All year we have been hearing about the threat of Amazon landing on our shores, and not a single player in the Australian retail sector has been spared.  Notwithstanding that the online retail giant didn’t start trading in Australia until only this month, company valuations have in some cases halved and boards placed under immense pressure trying to develop strategies to incorporate an online sales offer.

In January, David and I discussed what impact we thought the Amazon threat might have on Myer as we personally, and a very small proportion of our clients are holders.  At the time, the stock was trading at around $1.30, and the valuation seemed less than demanding trading at a significant discount to its peers.  Acknowledging that Amazon and other online retailers were going to shake up the sector, we decided that at current prices most of the downside was likely priced in and felt confident that management was moving in the right direction with their omni-channel marketing.

With that in mind, and given that Solomon Lew had just purchased a substantial stake in the company we decided to hold.

Currently Myer shares trade around 70 cents, so I think it goes without saying that given the chance again, to sell would be the right decision.  It was easy to underestimate the task that stood before the board.  Like a ship, the bigger the boat, the longer it takes to turn.  As technology evolves faster, more and more incumbents are going to be faced with the same challenge, and complexity of the task is directly correlated to the size of the business.

Companies under threat of disruption are hampered by more than just the task of reinventing their business.  As sentiment turns, access to capital becomes tougher and the news paints the firm as “yesterday’s fashion”, which has the effect of enticing customers to explore the offering from the disrupter.

I have no doubt that in time, Myer and other Australian retailers will transition into the new retail environment, and other firms challenged by disruption will do the same.  However if I am faced with the same conundrum in the future, the obvious decision is to take the money off the table until the transition is complete.

Looking forward to 2018, I am excited by the data suggesting that the global economy is returning to growth, and as much as disruption is a threat it also creates a new opportunity every day.  The past 10 years have helped shape Australian firms to be leaner, sharper and more resilient.  Couple that with the significant investment (both time and money) into local emerging technologies and you have a recipe that could see the Australian stock market finally catch up with our global peers.  Additionally, the prediction for low growth in the property market may see capital transition into equities which will provide further tailwinds.

It’s an exciting time to be investing in Australia and I hope 2018 can provide as much experience and success as 2017 has.